The Mix is the Match

When a company manages as much power as the California Independent System Operator (ISO) Corp. does, its headquarters naturally should convey a reliable yet energetic presence.

The California ISO manages the electricity that flows across 80% of the state’s high-voltage grid. About 600 people work at the company’s headquarters, and the building hosts numerous public groups year-round. With three separate building elements, the 277,000-sq-ft complex includes one wing for public functions, one for administrative offices, and a restricted wing for essential services such as power dispatches and real-time operation of the high-voltage electrical grid.

Using a variety of exterior metallic elements, architect Kristopher Barkley of Dreyfuss & Blackford Architects achieved the kind of machine-like appearance that connotes the technology bent of the organization while offering a wide variety of views and perspectives to users of the building. For that, the building—completed in January 2011—won a 2012 honorable mention Chairman’s Award from MCA.

As a complement to the prefabricated concrete that acts as the building’s bulwark, the outer materials include

“I use metal quite a bit,” Barkley said. “I really like the finishes that are possible with it. I like to mix materials a lot, and I think metal really goes well with a lot of things. You’ve got something that feels lighter with the metal, and then you’ve got the heavy kind of stability that’s expressed with the concrete.”

The panels not only offer a blend of textures, but also provide a kind of thermal break between the building’s interior and an exterior that often reaches more than 100 degrees in the summer. The insulation offered by the Centria wall panels helped the building achieve LEED Platinum certification.

“There can be a pretty major differential in temperatures,” Barkley said of Folsom’s typical weather. “Anywhere you can create a thermal break between the exterior and interior of the building—it keeps heat transfer from happening.”

A great deal of glass lines the building, particularly on its north and south facades. That kind of window space and sunlight exposure called for a variety of shading techniques, two of which Barkley used metal to achieve.

On the south side, horizontal sunshades reduce the amount of direct sunlight flowing into the building, but also allow for excellent views out. On the western front of the building, the GKD stainless mesh provides a screen against the most piercing sunrays that the building is exposed to.

“We really, really wanted to have a lot of glass that necessarily needed to face in a western direction, where the worst solar gain would happen,” Barkley noted. “Using that product, we were able to get a lot of light in the space, and even views through it, but it screens much of the sunlight coming into the space.” 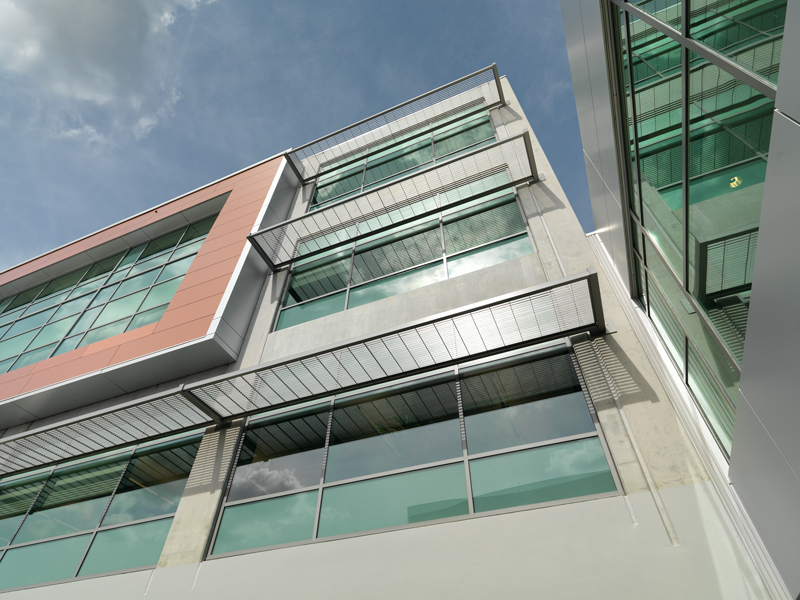